PRESS RELEASE BELOW. THIS IMAGE 300 DPI 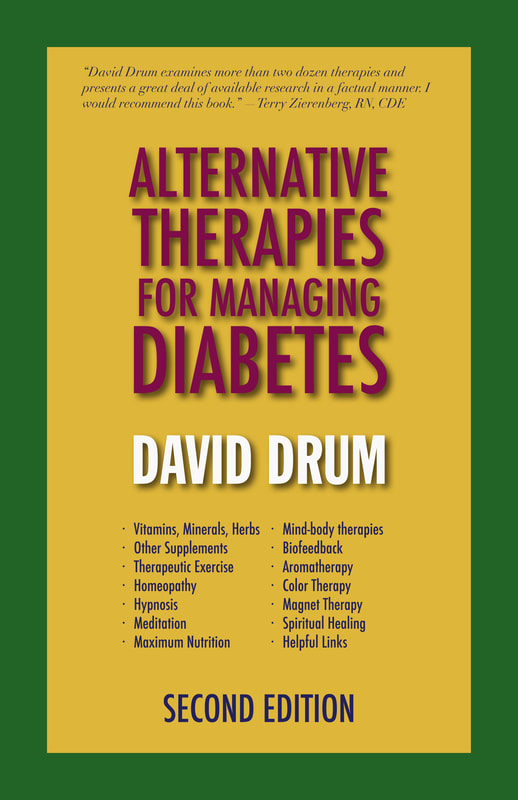 Drum’s 293-page book will be priced at $14.95. The 6 x 9 paperback is aimed at people with diabetes who are curious about alternative therapies and want to learn a bit more about them, he says.

“More than 30 million people have diabetes in the United States, and many of them are curious about alternative or complementary therapies,” says the author, medical journalist David Drum. “This book will help people with diabetes understand what’s out there and how it might help them.”

The book’s author, David Drum, is the co-author of The Type 2 Diabetes Sourcebook, with Terry Zierenberg, RN, CDE, also published by McGraw-Hill, as well as several other books in the health and wellness area.

“Alternative therapies don’t replace conventional medicine, but they are getting quite popular,” Drum says. “In the United States and Canada, people with diabetes are actually visiting alternative practitioners more often than they visit medical doctors.”

Alternative Therapies for Managing Diabetes was originally published by McGraw-Hill. When the rights reverted to the author, Burning Books Press released two updated e-book editions. The second print edition, in the works for some time, has been revised and updated making it as up to date as anything on the market.

Diabetes educator Zierenberg called Alternative Therapies for Managing Diabetes “a comprehensive and useful look at alternative therapies for men and woman with Type 1 or Type 2 diabetes.” Zierenberg added, “ I would recommend this book to anyone who is interested in "going a little farther" along the road to self-managing diabetes."

The book is a survey of alternative or complementary therapies which may be of interest to people with diabetes. It incorporates a good bit of research on individual therapies and includes a comprehensive resources section, an index, and an extensive bibliography of sources.

Included are chapters on vitamins, supplements, herbal medicines, low-calorie diets, mind/body therapies, acupuncture, magnet therapy, homeopathy, aromatherapy, hypnosis, meditation, spiritual healing and more than a dozen other therapies of possible interest. The author offers suggestions on how to evaluate and use alternative therapies, and includes precautions to consider before their use.

Stories of men and women with Type 1 and Type 2 diabetes who have utilized alternative therapies are incorporated into the book.

Burning Books Press of Los Angeles was founded in 1984 by independent writer David Drum. The press originally produced artist’s books and art works but expanded in 2008 to include reprints e-books, and original works by David Drum.